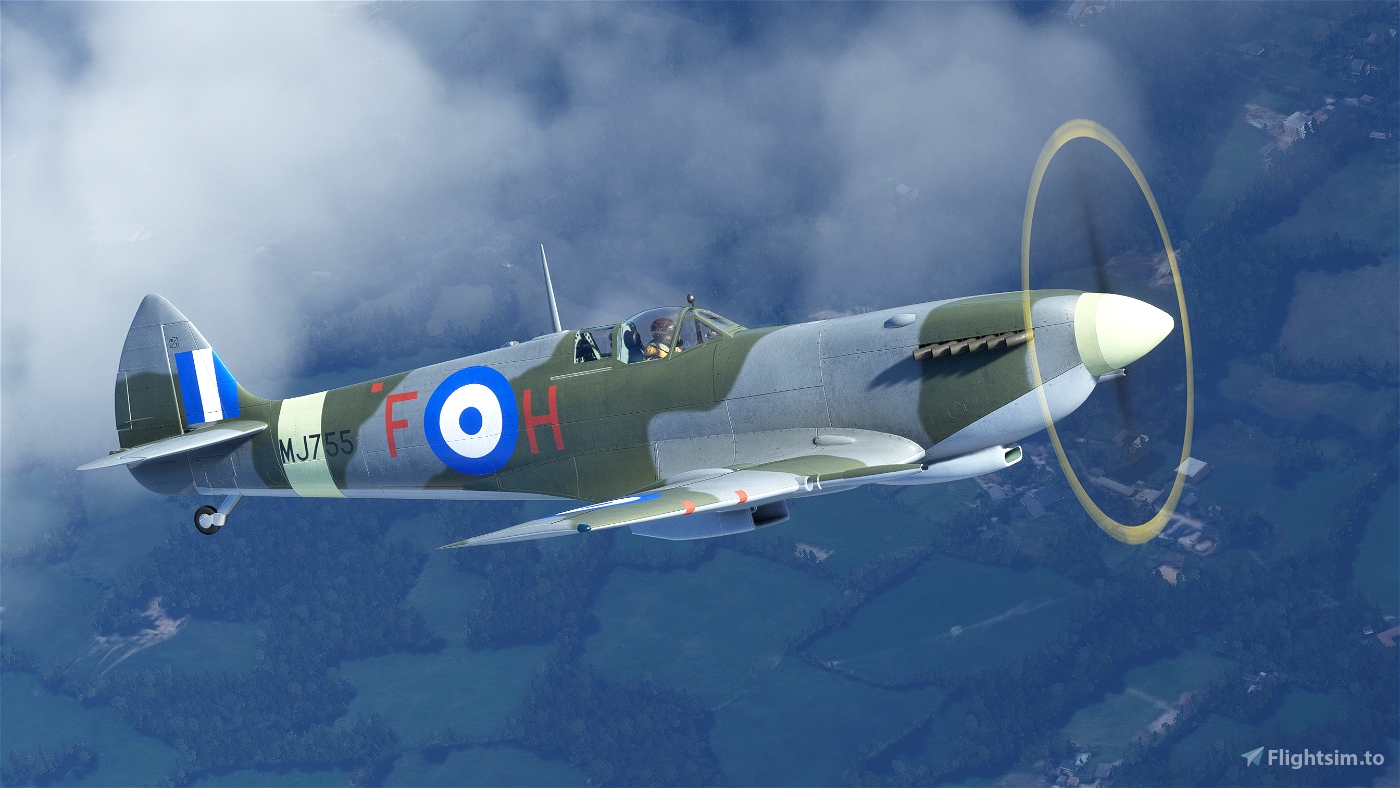 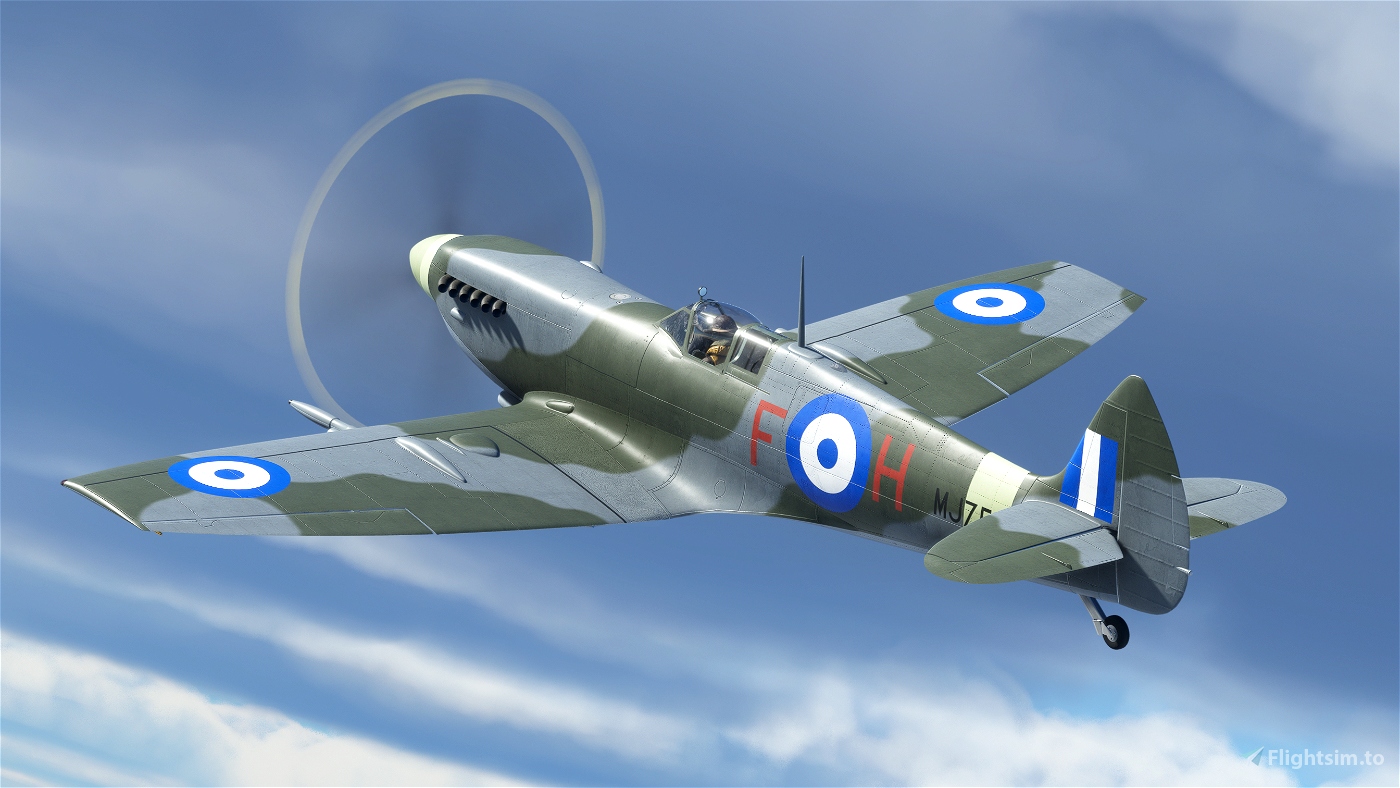 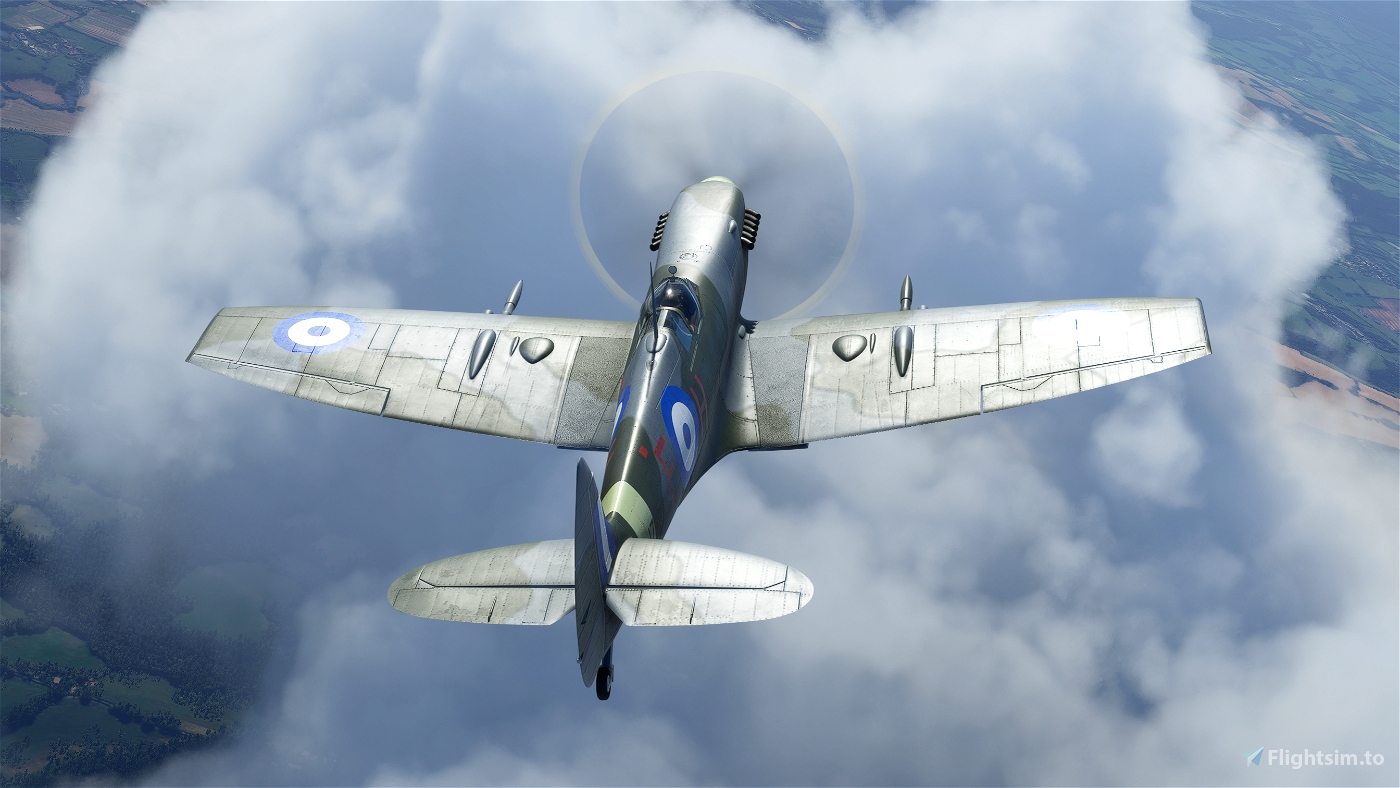 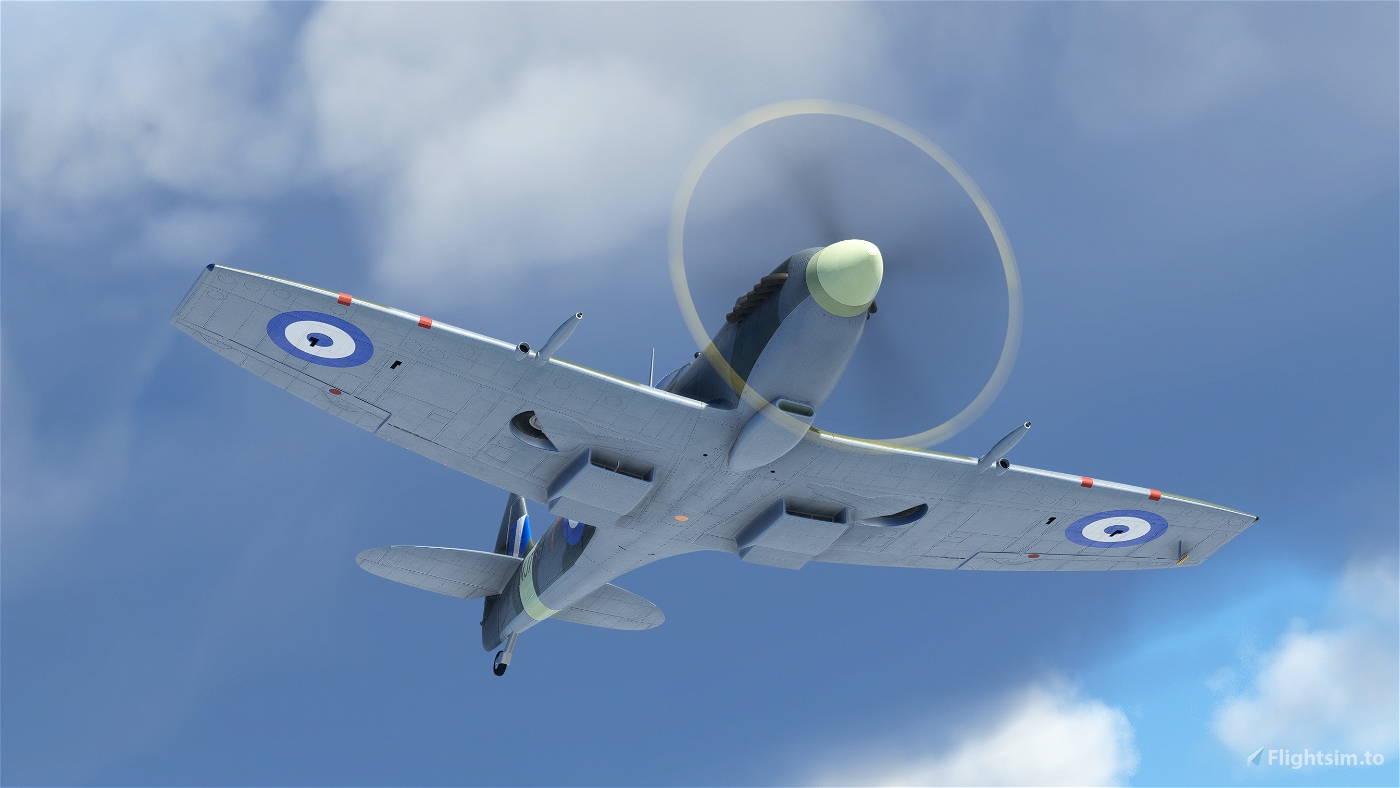 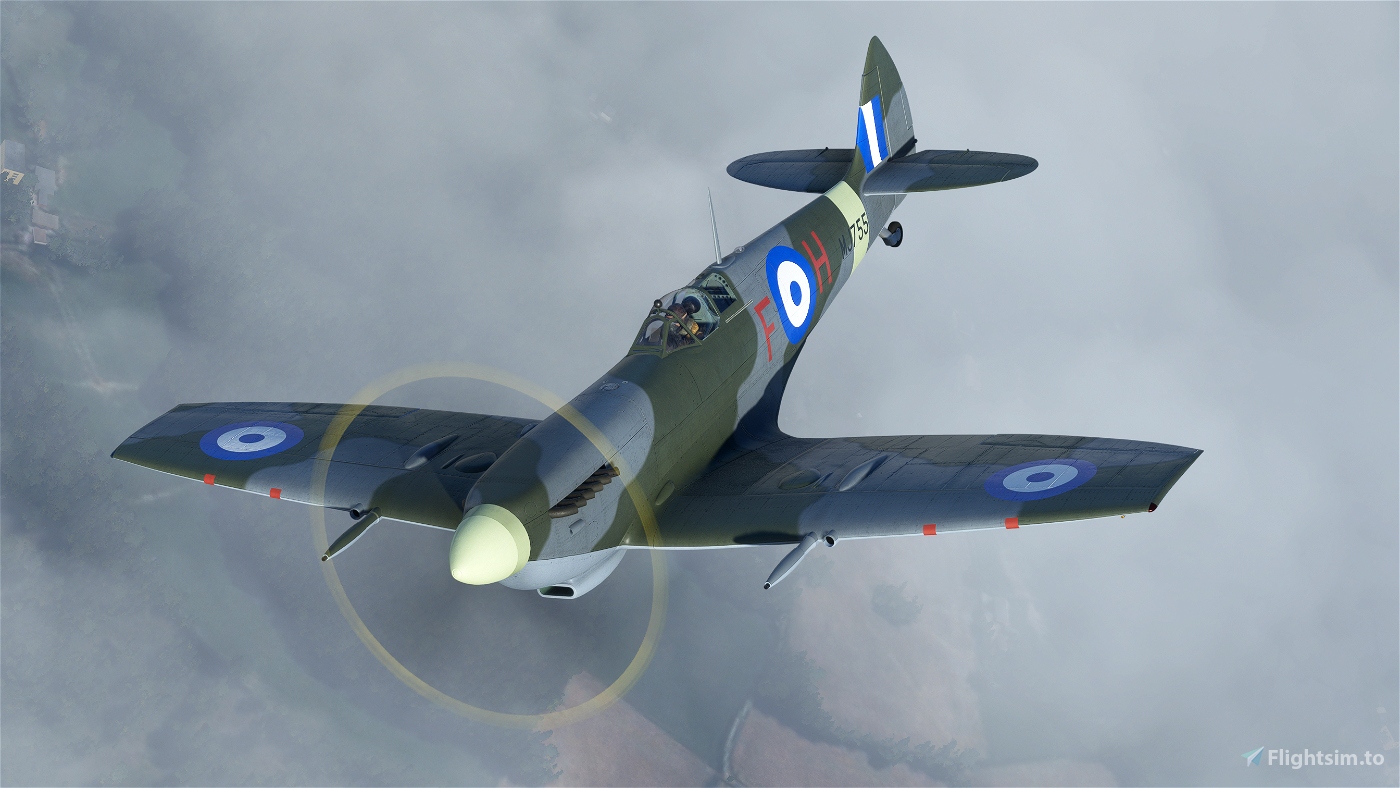 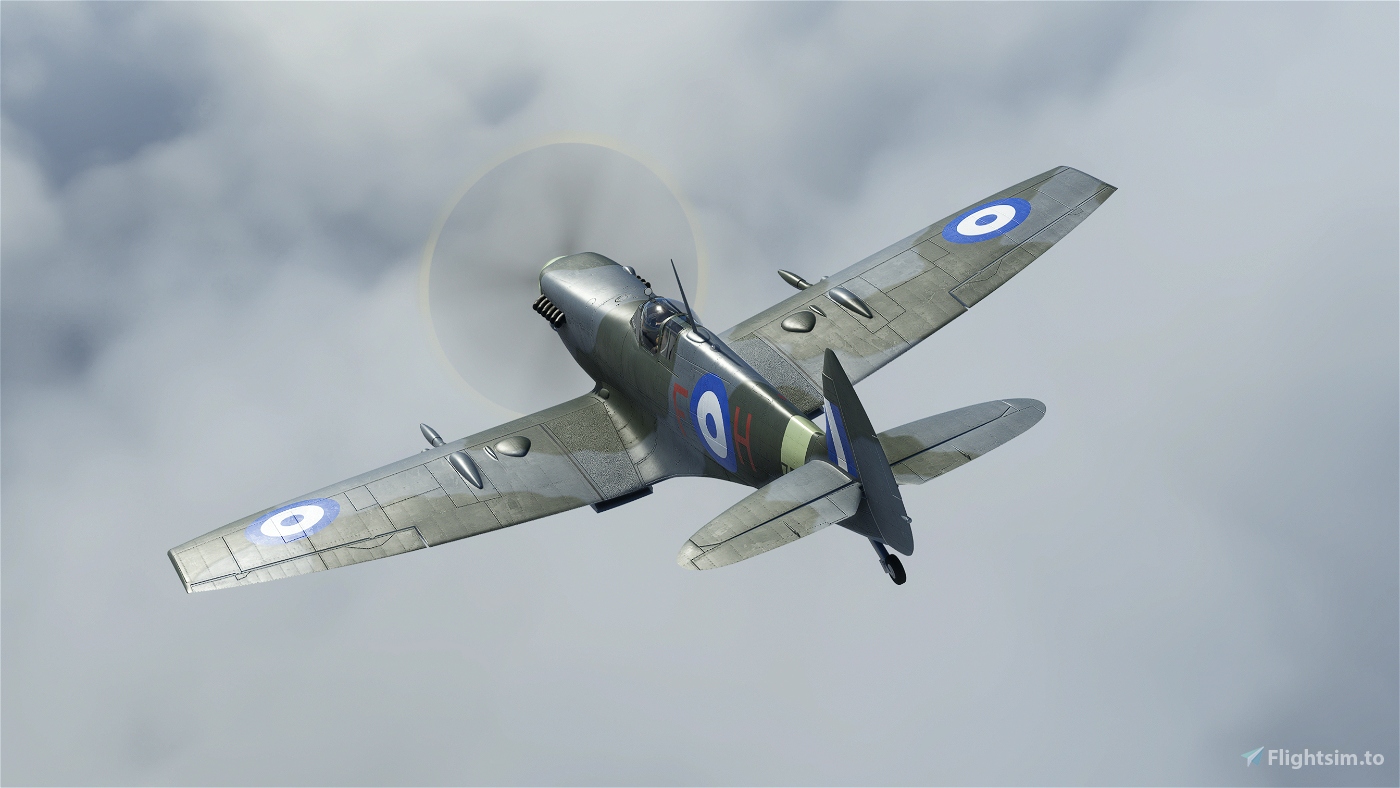 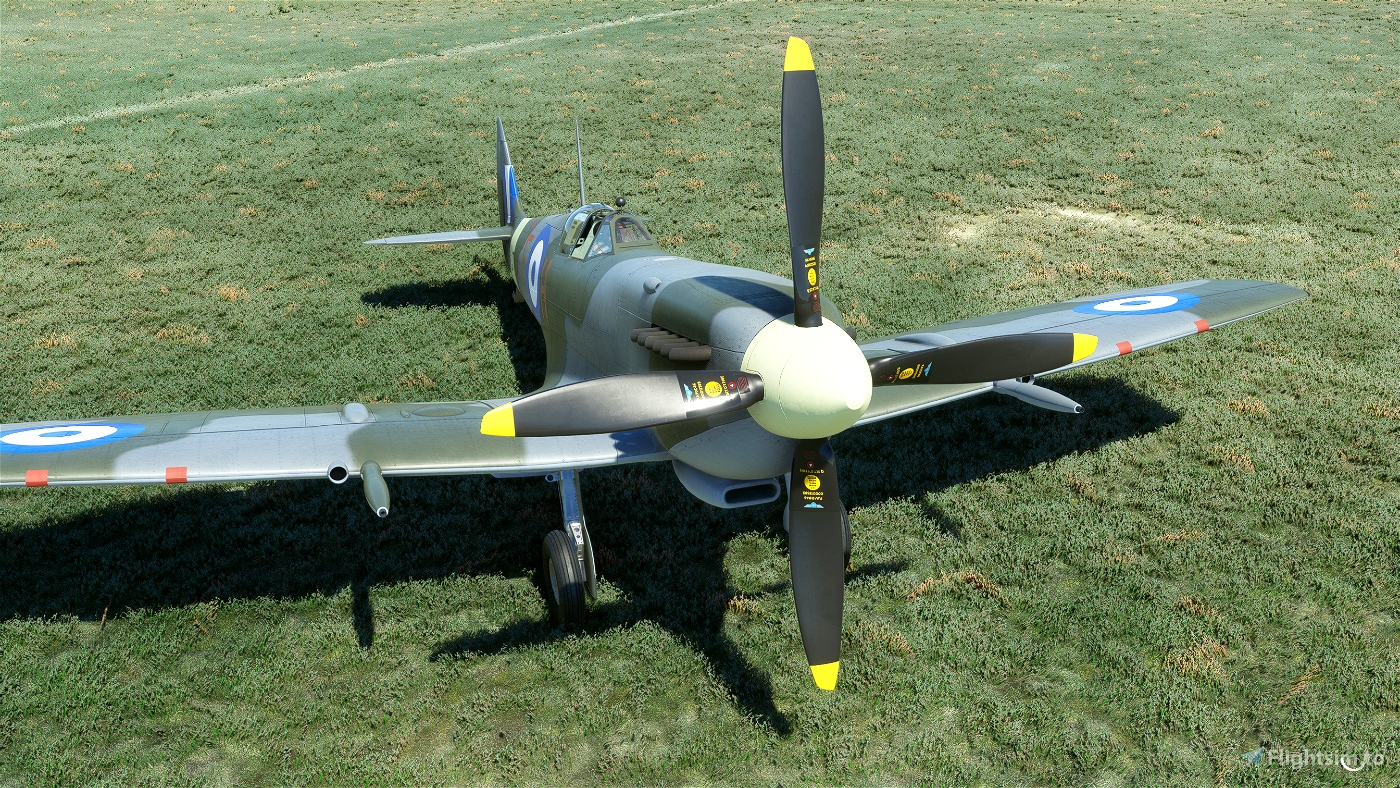 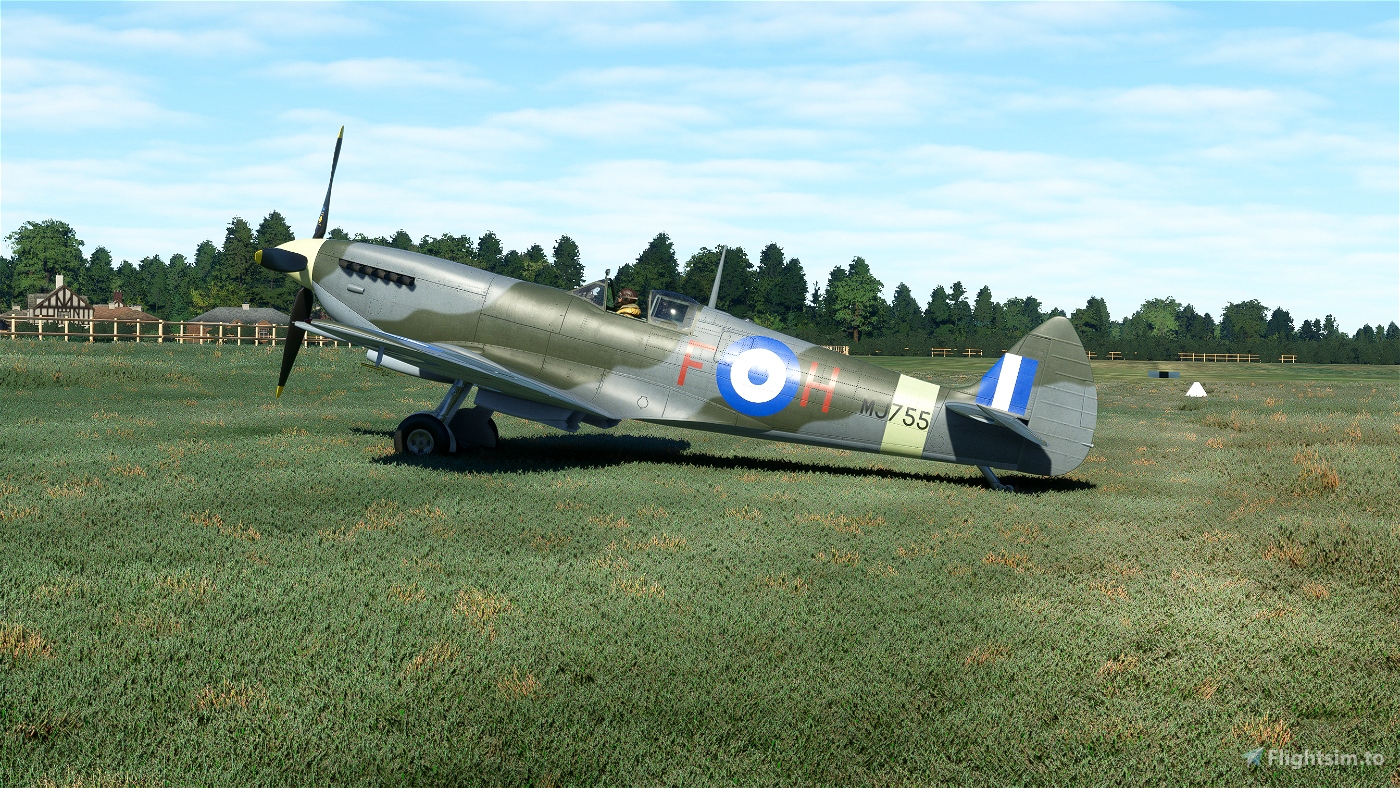 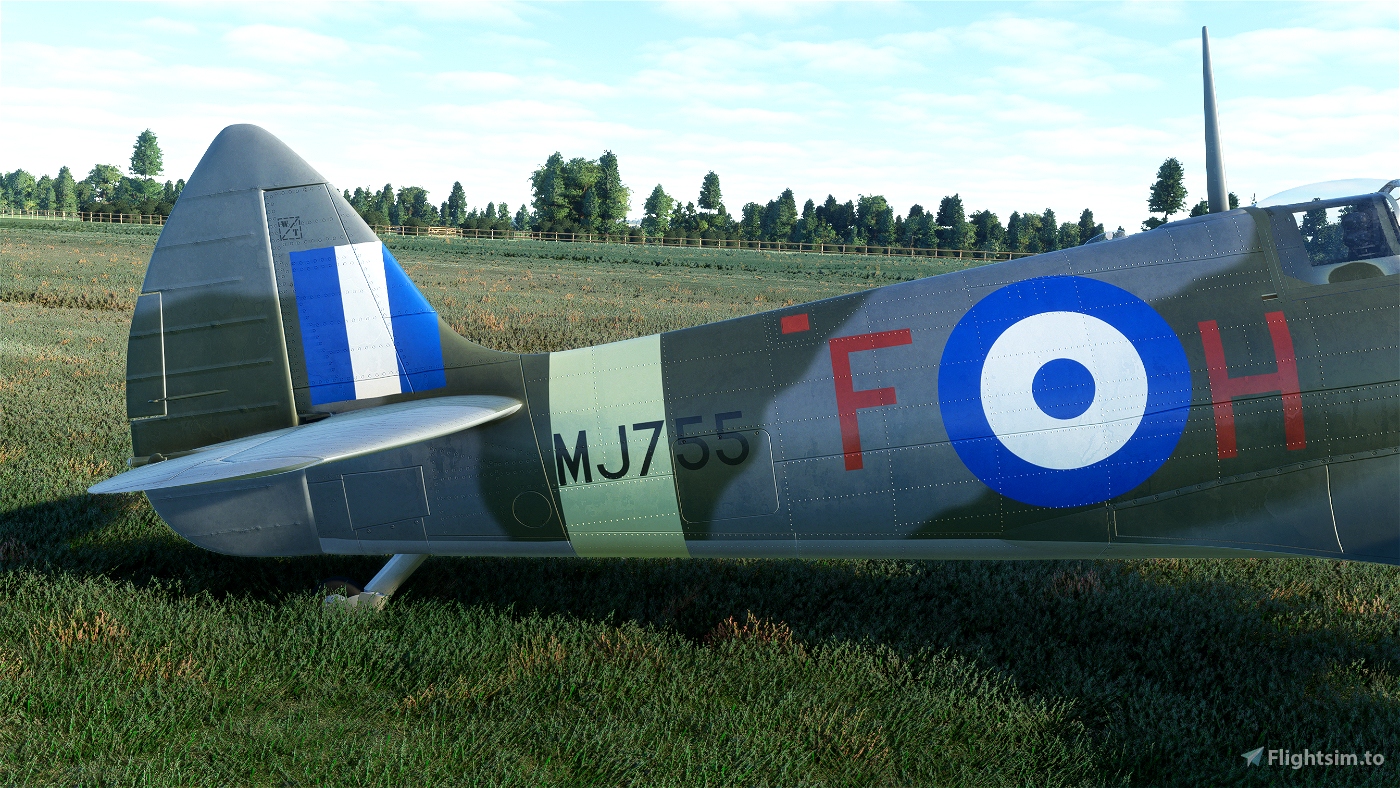 This repaint has been updated to include new and modified cowling fasteners and customized "slipper tank" textures. A fix for the clipped wing model is also included, which corrects two problems that have existed since version "1.0.2rc2" of the FlyingIron Simulations Spitfire. With the fix installed, the "slipper tank" will now be able to be dropped/removed as it should be, and the extra wing leading edge fabric patches/gun port covers that shouldn't be present will now be removed.

This Spitfire Mk.IX, given the RAF serial number MJ755, was originally manufactured at the Vickers-Supermarine Castle Bromwich Aeroplane Factory, located near Birmingham, UK. It was delivered to No 33 Maintenance Unit at RAF Lyneham in December 1943 and remained in storage until early 1944 when it was allocated to the Middle East Air Force and dispatched by sea to Casablanca, arriving March 13, 1944. In August 1944, MJ755 was assigned to No 43 (China-British) Squadron, known as the ‘Fighting Cocks', and coded FT-V. The aircraft flew in support of the Operation Anvil landings in the South of France. During its service with 43 Sqdn. its bases included Ramatuelle, Sisteron, Lyon/Bron and La Jasse before moving to Peretola, Rimini and then Ravenna in Italy and ultimately Klagenfurt in Austria. In February 1947, MJ755 was taken on charge by the Greek Air Force and by April was assigned to No 335 Squadron at Sedes. Later, in 1949, it was sent to the reserve pilots training center. In 1950, MJ755 arrived at the State Aircraft Factory in Athens for overhaul and to be fitted with two fuselage-mounted cameras for reconnaissance work. It was last flown on December 8, 1953, before being sent to storage and then display at Tatoi Air Base near Dekalia.

The Hellenic War Museum in Athens displayed the Spitfire for many years until the creation of the Hellinic Air Force Museum in 1992. In 2007, plans began to be formulated to have MJ755 restored to flying condition. On March 23, 2018, the aircraft arrived in a container at the Biggin Hill Heritage Hangar, at the London Biggin Hill Airport, for a full restoration to flying condition. The authentic restoration, of the exceptionally complete airframe, was completed by the start of 2020 and MJ755 first flew again on January 19, 2020. It is painted in the color scheme it wore while in service with No 335 Squadron of the Hellinic Air Force. Believed to be the sole survivor of the Spitfires operated by the Hellinic Air Force, it was to be shipped back to Greece in 2020, but COVID temporarily delayed its departure from the UK. On May 25, 2021, Pete Kynsey set out on a three-day journey, flying the aircraft from Biggin Hill to its home with the Hellenic Air Force Museum in Tatoi, Greece. The aircraft arrived at Dhekelia Air Base on May 27th, escorted by F-16 fighters of the Hellenic Air Force's 335 Squadron, the same unit with which MJ755 once served.

This repaint, made for the FlyingIron Simulations Spitfire Mk.IXc, depicts the restored Spitfire Mk.IX MJ755 as it looks today. Owned by the Hellinic Air Force Museum, the aircraft is currently registered as G-CLGS in the United Kingdom and hangared at the London Biggin Hill Airport with the Biggin Hill Heritage Hangar.

- Although based on the product paintkit, the textures have been considerably modified and improved. Customized complete maps (PBR) and normal maps (3D detail) have been made.
- The positioning of the rivets and panel lines on the left elevator has been fixed (they're not positioned correctly in the product paint schemes).
- The inaccurate access panels on the cowlings have been removed and the actual access panels, as found on the Mk.IX Spitfre, have been added, as well as a couple of panel lines missing in the product paint schemes. The battery access panel has been added to the starboard rear fuselage, as well as the circular inspection panels on both sides of the rear fuselage. The electrical/radio socket access panel has been added to the port-side wing/fuselage fillets.
- The 'C' wing machine gun shell ejector chutes, as well as the jack holes, have been added into the textures on the base of the wings.
- The colors were all extensively researched and experimented with to achieve accurate in-game results, matching the same colors as seen on the restored MJ755.
- All markings and stencils have been drawn and positioned to match the real aircraft.
- The red-doped fabric patches on the starboard rear fuselage and under the ailerons have a pinked-edge to the fabric, which has also been added to the normal maps.
- Rotol propeller stencils have been added, just as they are on the restored MJ755.
- Non-slip tape has been added to both wings, just as there is on the restored aircraft.
- The textures for the main landing gear and tail gear, landing gear inner doors, wheels, tires, wheel wells, pitot tube and cockpit side door lever, have all been modified. There is now a uniform silver-painted finish to the landing gear, inner landing gear doors and wheel wells, which are all authentically painted silver on the real MJ755.


Ole hyvä ja login tai sign up ensin kommentoidaksesi kohteita.
This category is for the Third Party Aircraft Spitfire Mk IXc by FlyingIron Simulations. You can purchase this plane from here.
Luvat

I'm not sure, Chris, as the cannons are part of the model, not the textures. Make sure you have the most updated release version of the FlyingIron Simulations Spitfire installed.

This file is hosted external. If you are the owner of this file, you may request the migration of this file to your account, where you can easily upload, manage and update it. No longer needed ugly, complicated links. The migration process can take up to 24 hours.