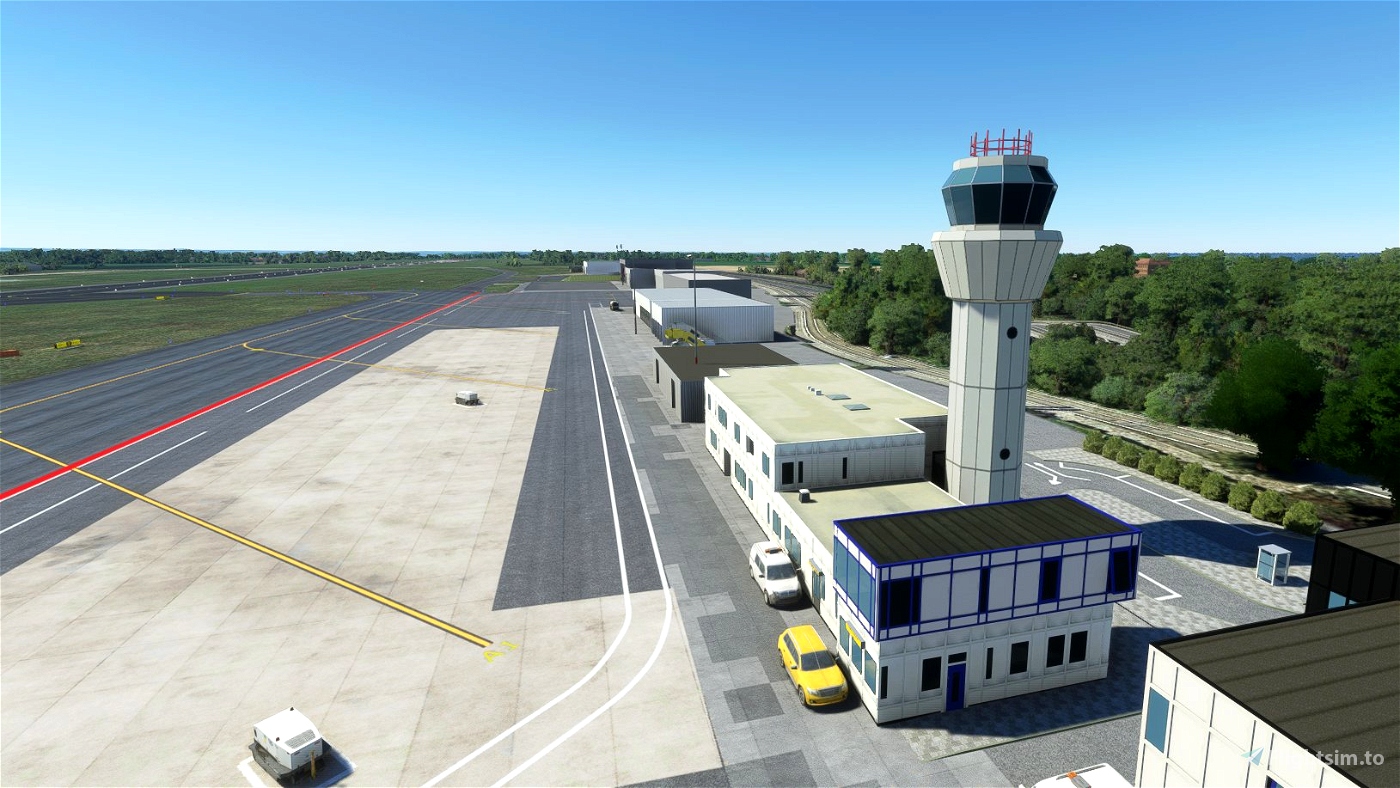 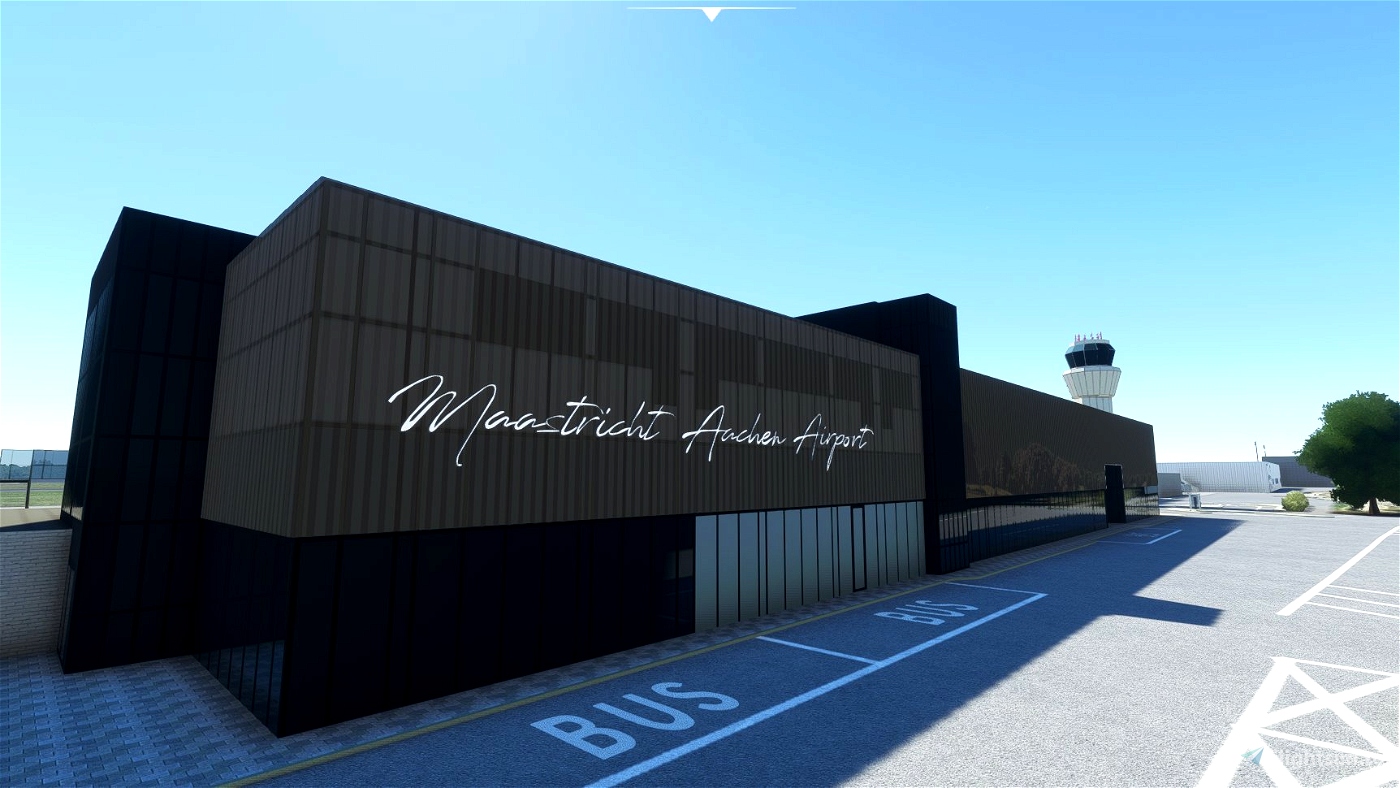 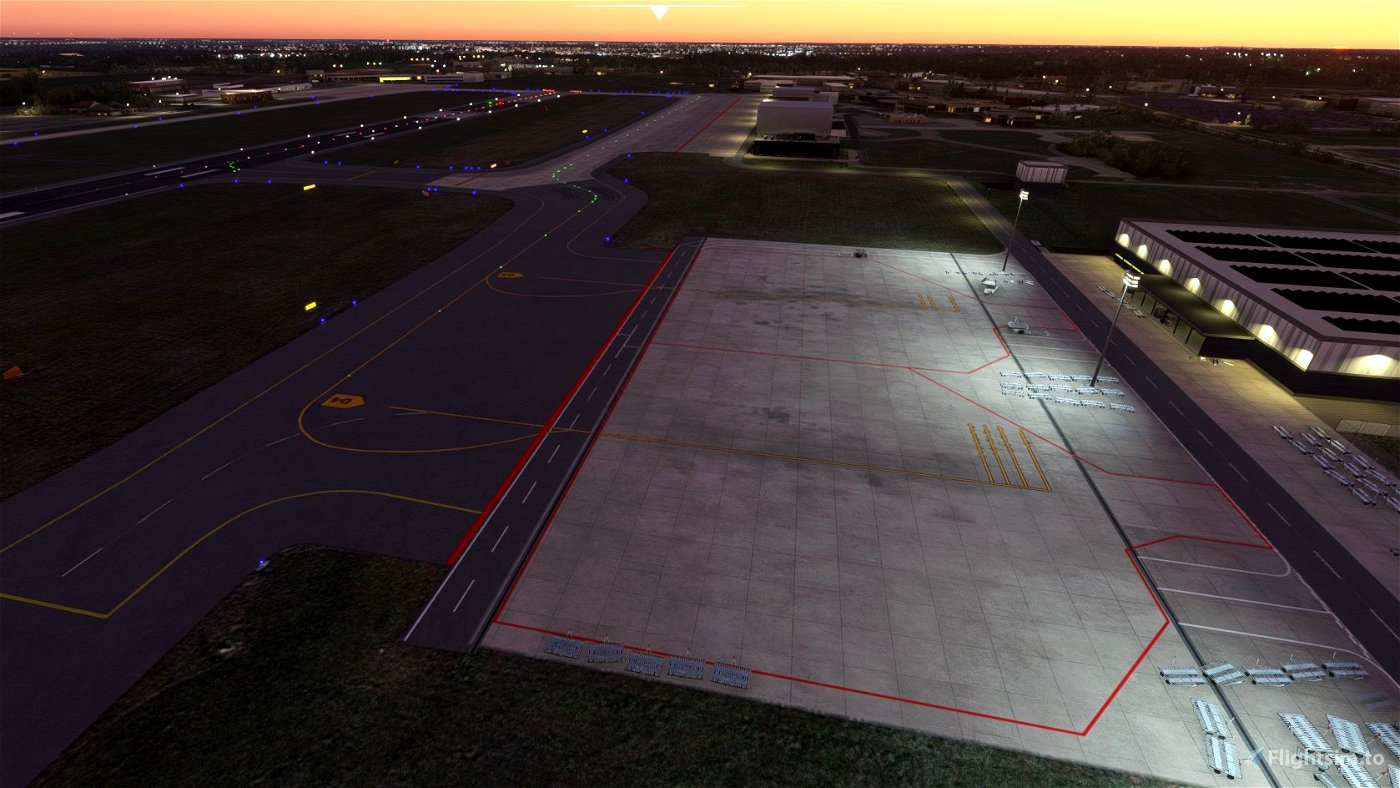 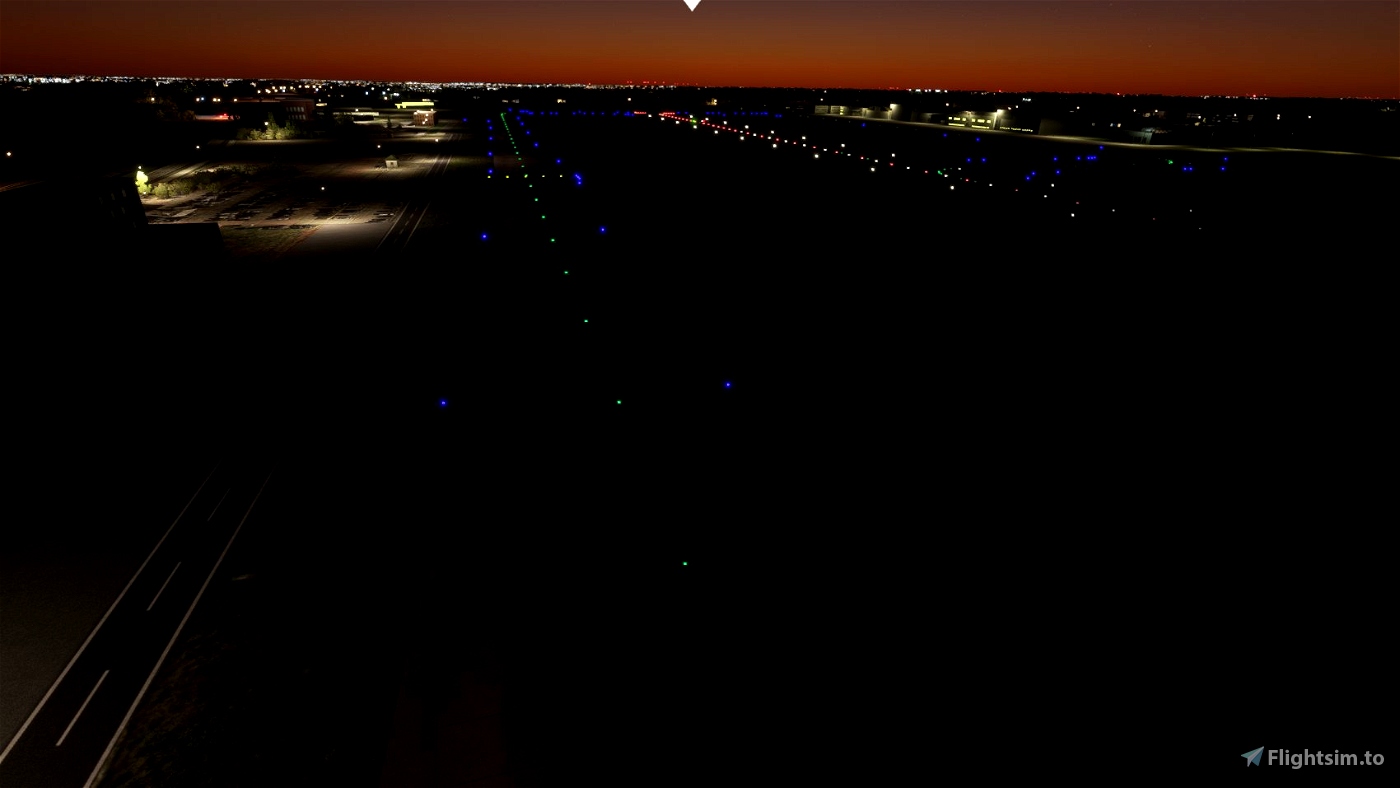 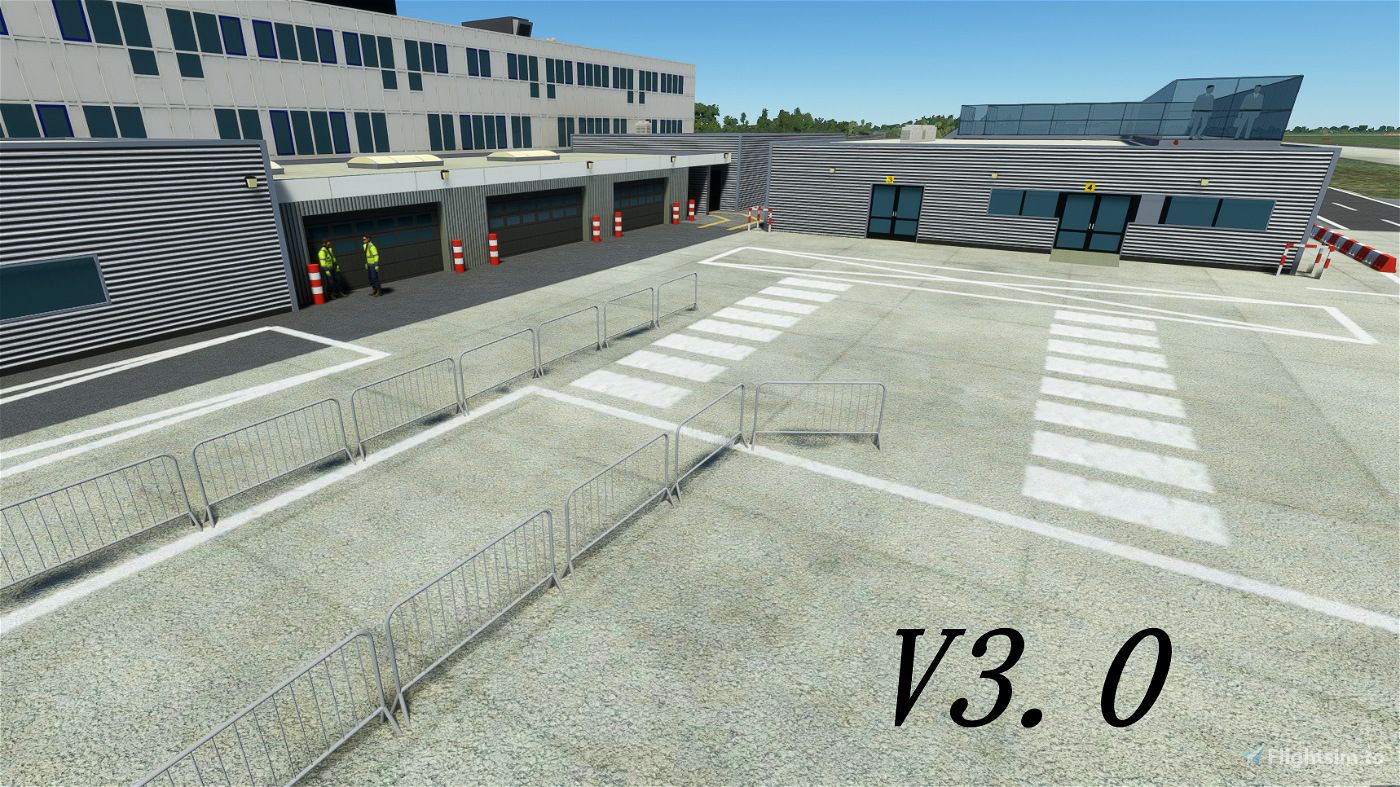 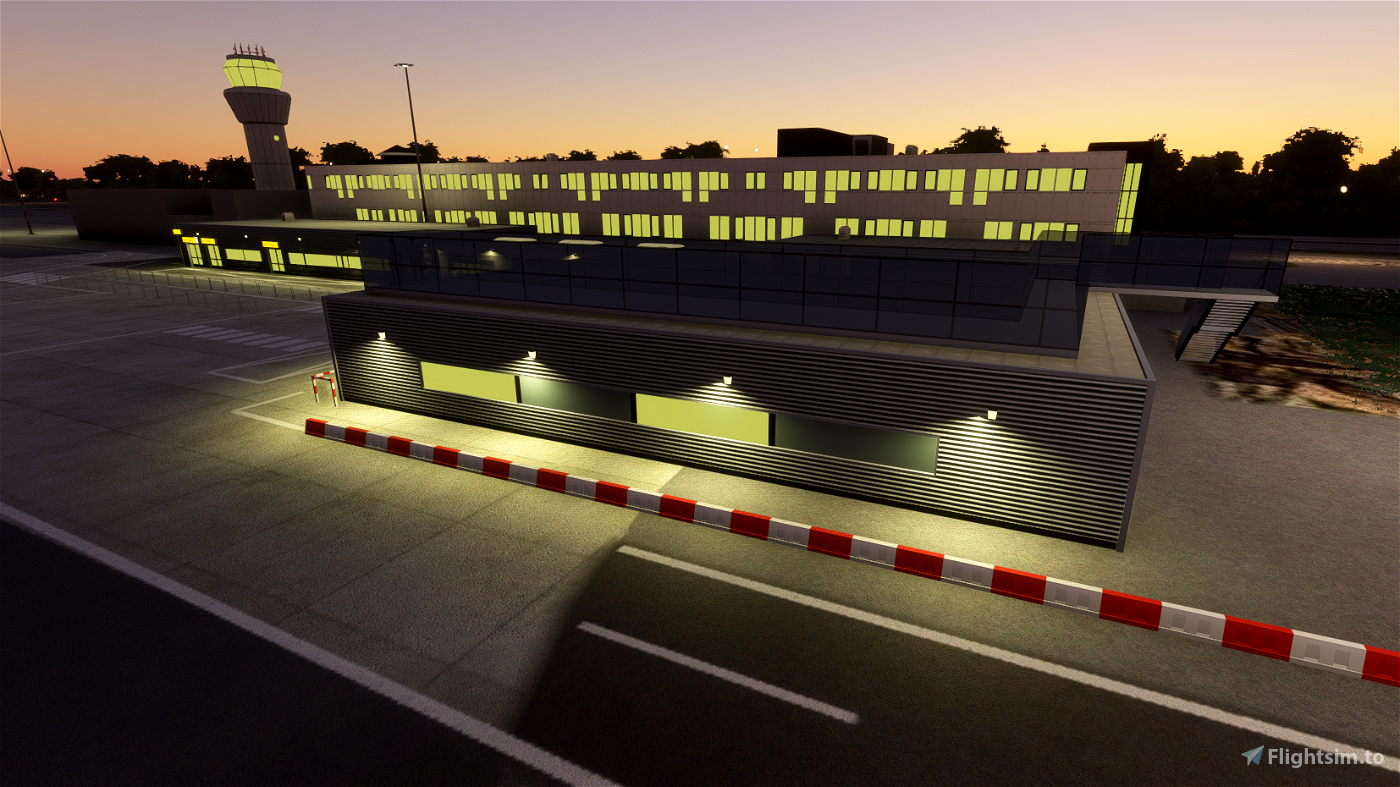 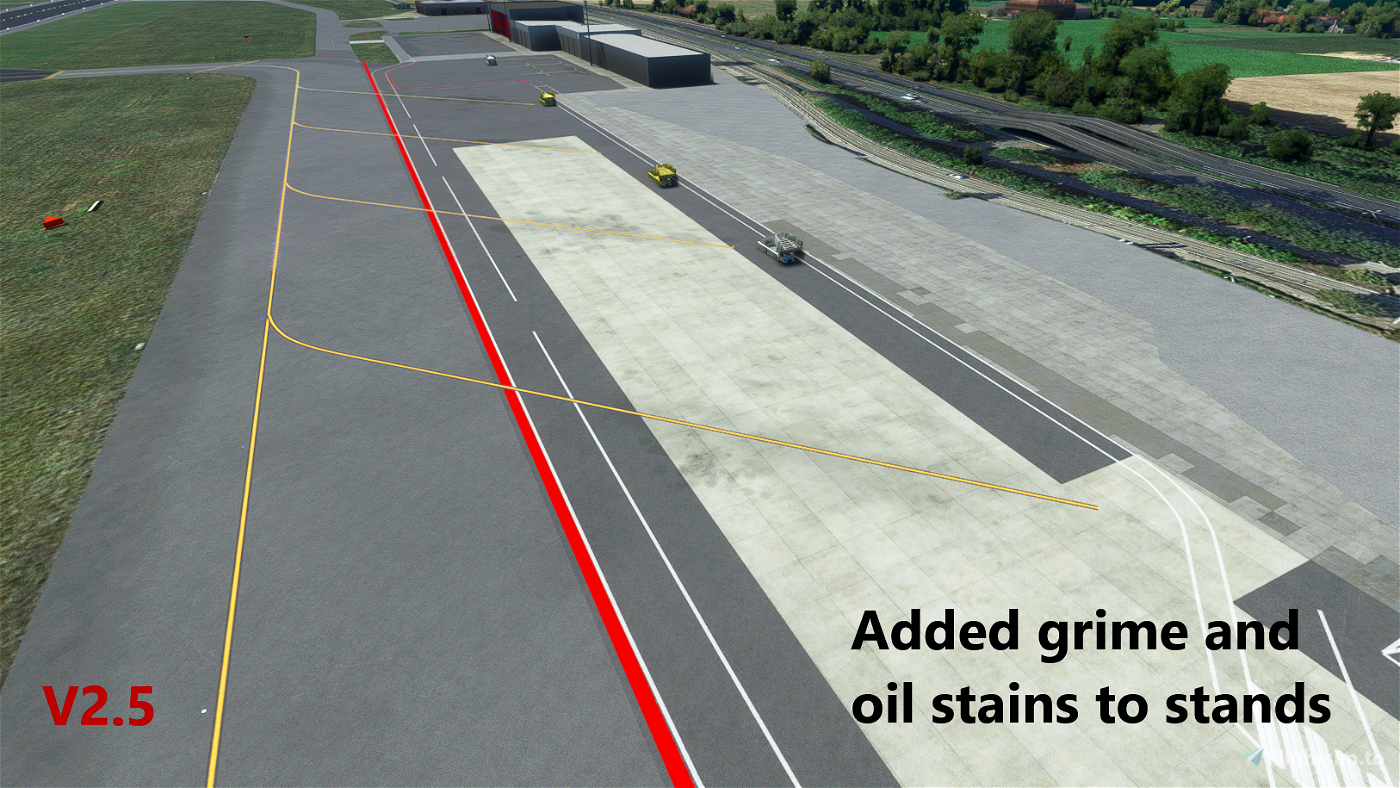 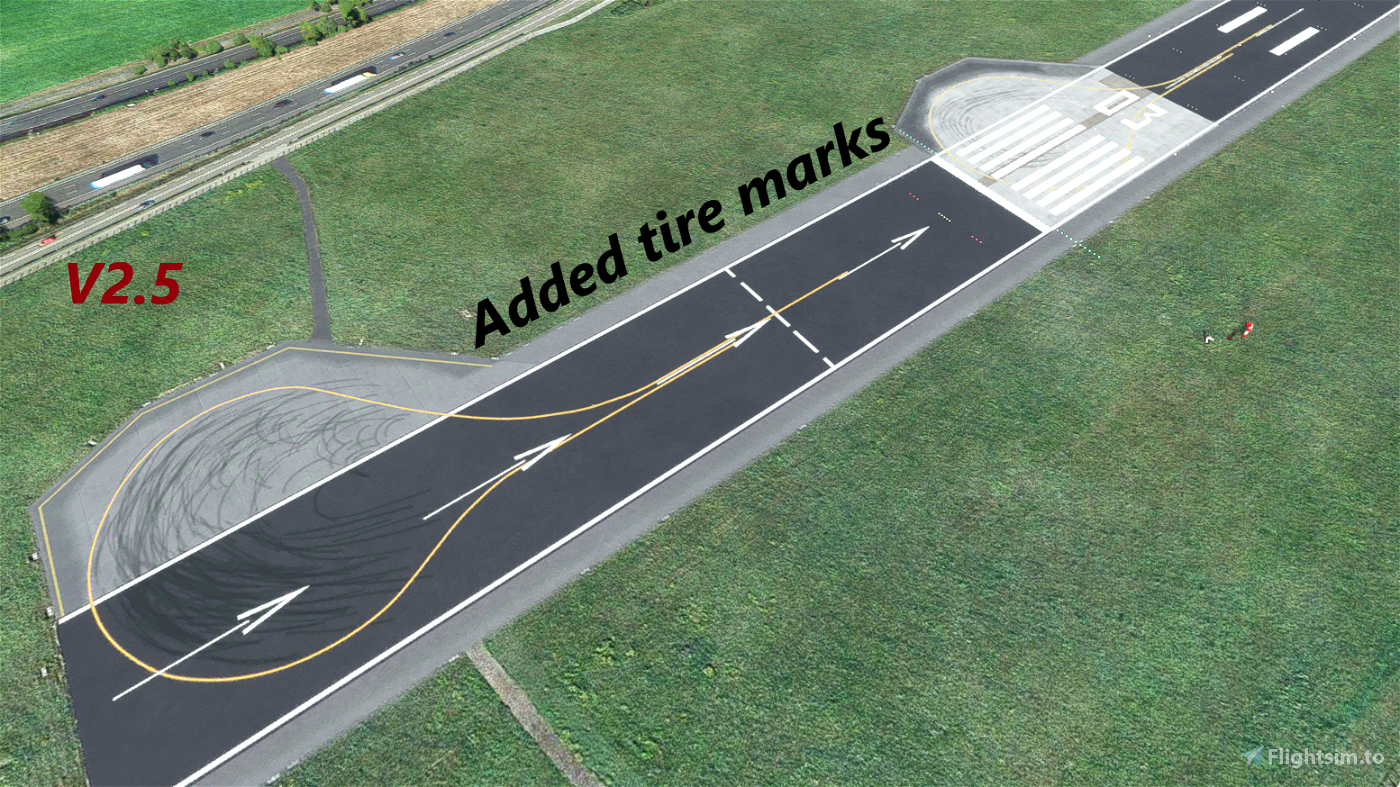 Special thanks to user Helifors for helping me with some models, check out his submissions!

Added proper night lighting
Added logo on the front of the terminal
Some small bugfixes
I have removed my own ILS, and restored the default. No idea if this fixes anything. Feedback is appreciated

5.0
Added more buildings
finished existing models
fixed some problems
removed static planes from base file, I will probably add an extra file with static planes in the future

Airport is now pretty much finished apart from some hangars on the East side of the airport.
Please inform me if you run into any problems

Minor update
-Added windsocks, should now show proper wind direction. (There might be duplicates, if so let me know)

To do:
-Finish all models
-Hope the ILS magically sorts itself out

Minor update
-Updated model of the 'ops' building, south of the terminal
-Added a very basic model of some hangars at the C apron
-Added a work in progress version of what I think is the fire brigade
-Did some work to the road infront of the passenger terminal

small tweaks
-Changed the red colored lines to a less bright one.

To do:
-Model remaining buildings
-Add stand numbers to the A apron
-Sort out the ILS

V3.0
-Updated terminal model
-Added control tower
-worked on ILS
(it appears the old ILS is still present, I don't know why. My ILS is also present as it should. ILS runway 21 works, 03 does not)

V2.5
-Added new model of the terminal, this is by no means the fininshed version
-Added grime and oil stains around gates and stands
-Added grime near taxiway edges
-Added tire marks on runway and taxiways

V2.0
Added additional file which includes the aerial photography
This is not included in the main file

V1.6
Fixed an issue that caused the taxi lines not to show up

V1.5
-Added new taxiway line texture (Experiencing issues)
-Added stand numbers on B and D aprons
-Added orange triangles, no, I don't know what they are
- Added night lighting to cargo terminal windows
-Starting points are now a thing, no longer spawning on the runway

last version 6.1 gave me a CTD on loading the scenery with EHBK as the only active scenery adonn. after deleting the last version and reinstalling the previos version the sim gave no CDT and everything's working fine?????????????????

That's a lot of question marks.

I have experienced some CTDs when starting msfs for the first time. Second time it just works.

that did not work for me, tryed that several times cleared out everyting in the community folder and still no luck. after reinstalling the other version it oke. i'm a bit short of time the next couple of day's bud i will try again and will let you know the result

Mate honestly, I have no clue why. I delete the default ILS since it isn't working. I add my own. Both are in the scenery at the same time...

Weird thing is even the default ILS is messed up, only works on RNY 21

Strange. I used it succesfully on Runway 21 in the Airbus and the TBM a couple of times past days. Full ILS/GS Autoland with both Lateral and Vertical guidance in the Airbus. TBM likewise except for the Autoland.

Nice scenery. At the moment they are painting the new 8-hotel white!

Thanks for the heads up. At the moment there are very little images of the hotel available, thats why it's a basic model. Once there are pictures and hopefully new satellite images I will update that building

Thanks for this new version! I am just planning a flight to EHBK, but I see ILS21 is missing as arrival? Only LOC21?

yeah that must be what msfs has as default. At least LOC is better then my inoperative ILS.

Once I figure out how I will add it. Now I am going to focus on ELLX

The airport is becoming better and better

Could you please add the option to download/enable static models, at the moment many of the models are still at the real airport?

Many thanks for bringing EHBK to MSFS! I did my first flight out of Maastricht and found 2 issues:

Thanks! I will change that next update

Fixed the sign, could you let me know if the ramps work as intended? I had to remove the stairs because "only gates can have jetways". Apparently stairs count as jetways

Hi, could you do some tutorial how to add static aircraft to the scenery? I would like to put some planes on one airport

download model from sketcup, save as collada, open in modelconverterx, save textures, export as .gltf MAKE SURE TO CREDIT THE MAKER

Can we have a version without static aircraft ?

Getting better every time. A small remark: only the windsock on the Southern side of the field indicates the proper wind direction. The other two indicate 180 degrees off.

8 month(s) ago
Very nice aitport. Start to grow with every update.
Maybe an idea to also change the manifest.sjon so it's easier to follow which version is installed.
Thanks!!!!

8 month(s) ago
Very nice addition for the "regionals"😃.
I see double ILS 'beams' in Little Navmap.
Frank had a similar problem with EHLE, but he fixed it recently.

8 month(s) ago
Great work, hope you continue the project to make it complete!
Note: please rename your modellib.bgl, could cause CTD!
https://forums.flightsimulator.com/t/scenery-creators-please-move-or-rename-your-modellib-bgl/307563
0
0
Reply

This has now been fixed

8 month(s) ago
Edit: unfortunately after trying a couple times the sim crashes when calling the tow truck. When I change back to the default scenery everything is working normally. I am using the FBW A32N.

Wow! Finally, my home airport is being created. One little thing can you tone-down the red lines on the cargo B apron? Thank you very much!!!
0
0
Reply

CTD could be related to this:
https://forums.flightsimulator.com/t/scenery-creators-please-move-or-rename-your-modellib-bgl/307563

I have renamed the modelLib, however I am not sure if this has solved your problem. please let me know if you run into any problems.

The scenery works now! And it gets better and better. I hope you will continue with the project and the surrounding buildings. Maybe at a later date you can model the Chemelot (DSM) area, which is a well known landmark when approaching RWY 21. And after that you can model the city of Maastricht. 😉. As of now, my compliments of your work so far. Thank you!